After dropping our friends to Catania, we planned to work our way across the north coast of Sicily to the most westerly point that is closest to Sardinia and possibly visit the Egadi isles to get even closer. I’m not a fan of overnight passages, but 2 more we’re unavoidable. We resolved to only cross in THE most favorable conditions remembering our trip to Malta when I was sea sick.

We had a hire car and visited Tyndaris, one of the last Greek colonies founded by the Syracusans in 396BC. It prospered under the Romans and Christians and was then destroyed by the Arabs. We visited the archaeological site which gave many insights into the everyday life of the inhabitants. 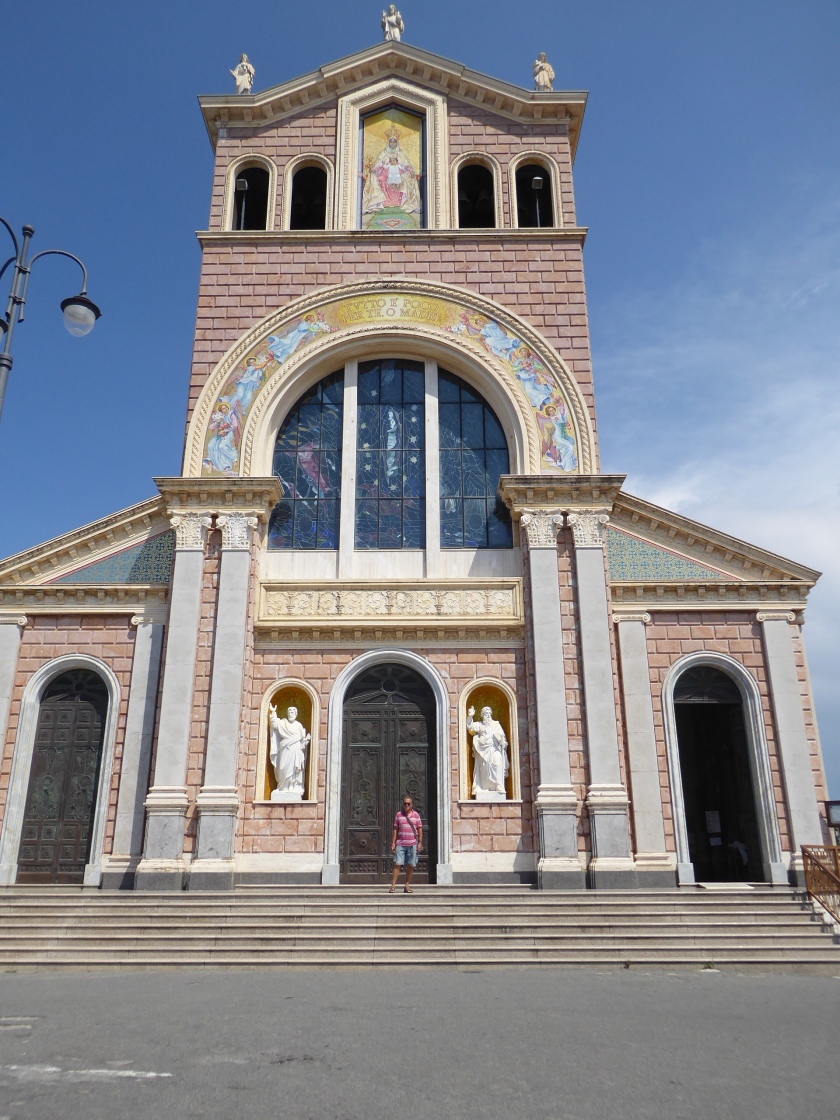 The Greek Theatre sits on a slope facing the sea. The Church houses the famous (?!) Black Madonna. There are the remains of a Roman villa and baths – with almost intact beautiful mosaics.

Also there is a view of the Laguna di Oliveri , a sand bar, below the Promontory of Tyndaris, celebrated by the poet and Nobel prize winner Quasimodo. No- I didn’t know that either!

Then on to Palermo- this sight seeing business is tiring!!

We went into a Marina right in the town , once again arriving by boat put us in the heart of things!

We only had a day but we managed to do a lot of wandering. We usually head for either the tourist info or the Cathedral. Here the centre can easily be walked around. As we reached the Cathedral the heavens opened- so we had somewhere to go didn’t we?!

The fountain- Fontana Pretoria was known as the fountain of shame due to the nude statues- backing the 16thC.

The Cathedral dates back to the 12thC. In my opinion it was beautiful and different on the outside. The inside was beautiful too but it was the outside that was interesting due to the many cupolas with majolica tiles, arched crenellations and a mixture of styles. You can also walk high up on the roof- which we did – of course!! 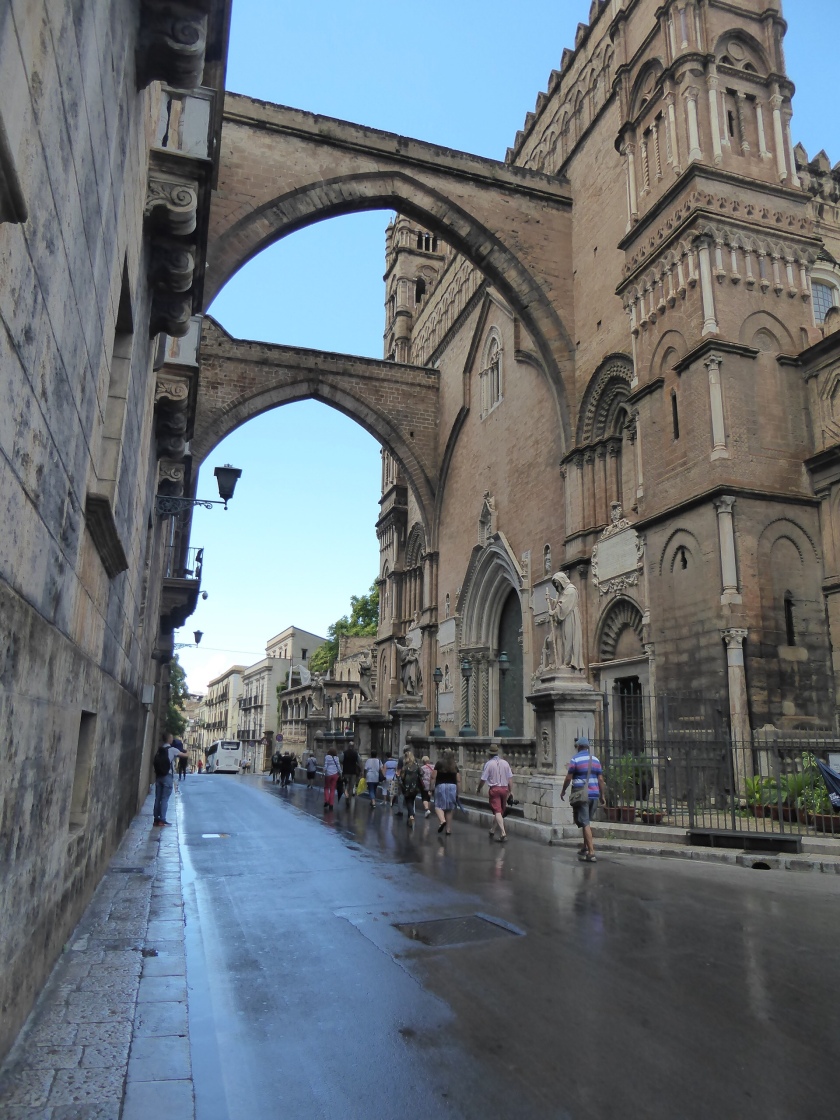 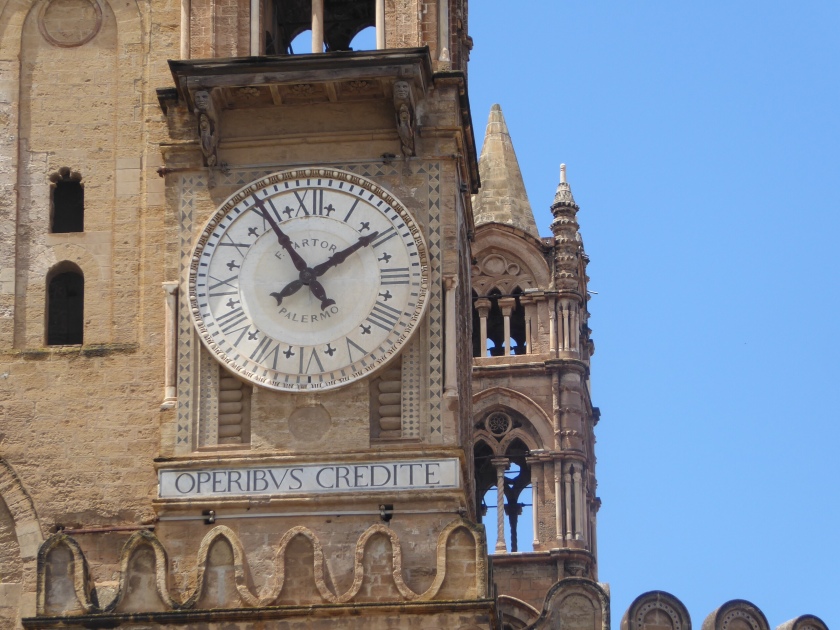 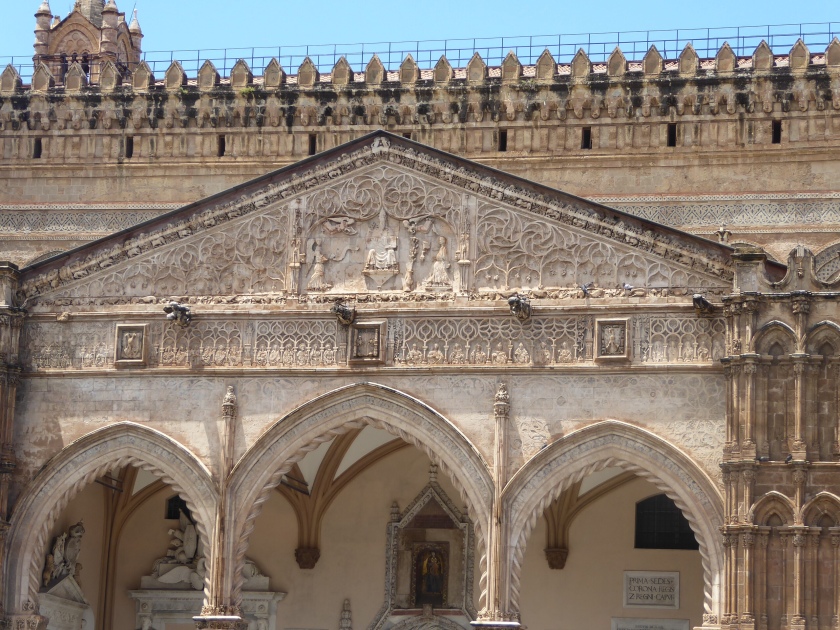 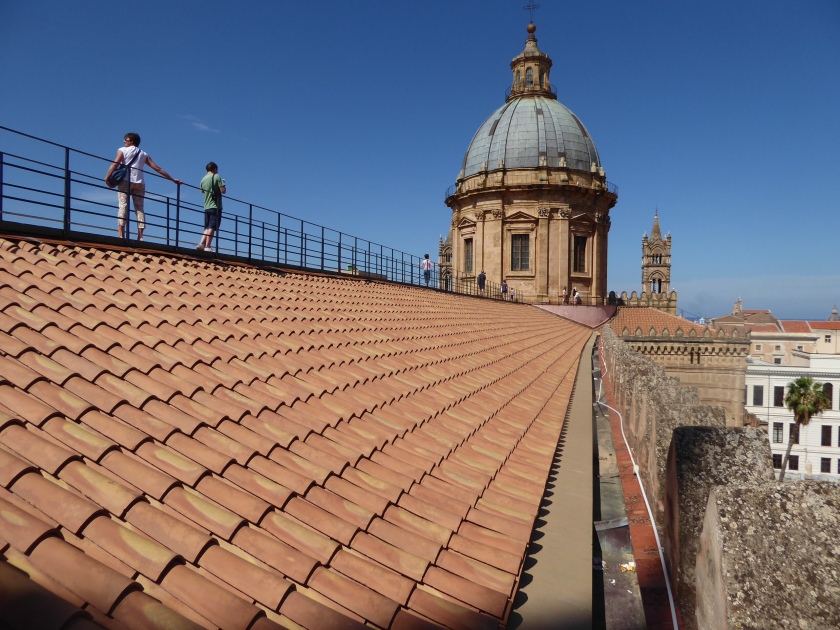 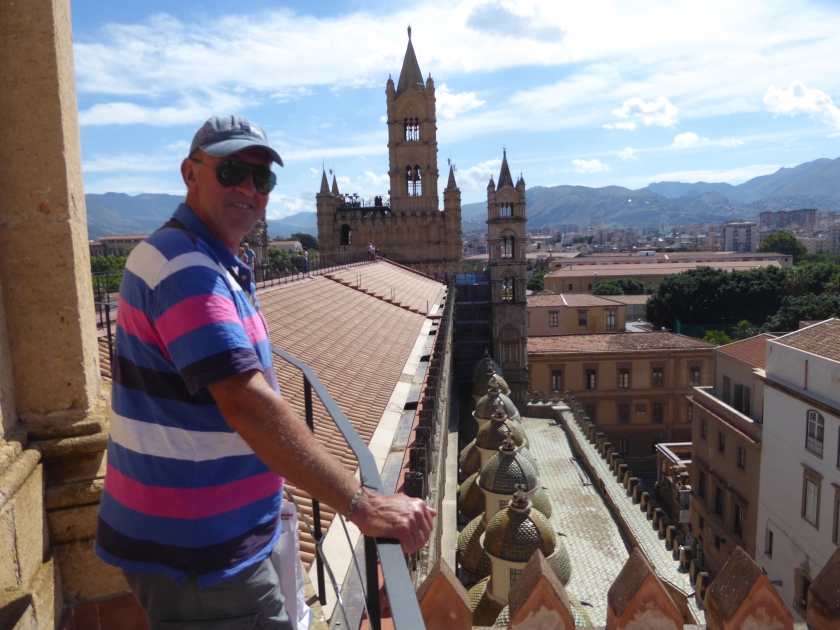 On to Trapani- our launching point for Sardinia. 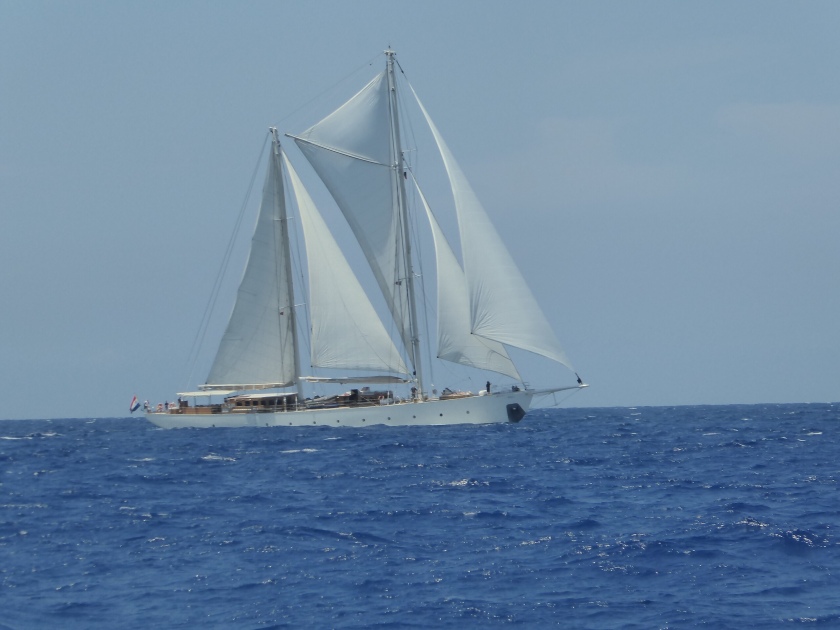 I like this boat with all its sails up.

We had heard that the best thing about Trapani is the medieval village on the hill. Well, Erice is another village, a bus ride plus cable car journey away, up the very big hill! So off we went.

It has an interesting history, for centuries it was a sought after destination for sailors and boaters being strategically placed. It is suspended between heaven and earth ( according to my leaflet) and is like a treasure chest with 3000years of history, rich in art, culture and myth. It also has 18 churches plus the Cathedral Madre many of which have become venues for scientific and cultural activities. Simon was in his element – 18 churches!!!

The cloud level was low when we visited, hence one or two eerie pics. We liked the castle and the little castle tucked below built by a scholar and archaeologist as a refuge. Today it belongs to the town. It’s called Pepoli castle.

Simon wasn’t keen on the tourist shops!I like to look. I liked these.

It’s built on a narrow curved promontory ( its name is derived from the Greek word for sickle), that juts out into the sea opposite the Egadi Isles. There’s a long long beach and lots of narrow streets ( there’s a pattern emerging here) and a Cathedral- which is a bit out of the old town. We had a beer in a pedestrian street and got tangled up with a wedding in the church immediately opposite, across a path really, not even a road.

When the couple came out, there was a mime artist that organised a little ‘tableau’ and a veiled dancer. Then they released, by popping a big balloon, lots of little heart shaped balloons. What will they think of next?

Later the wedding party turned up at the marina for pics, which we’ve seen several times in Italy.

We again only had a day here, but we certainly packed in the sights! Next – we depart for Sardinia

The conditions were deemed good enough – but I was nervous…