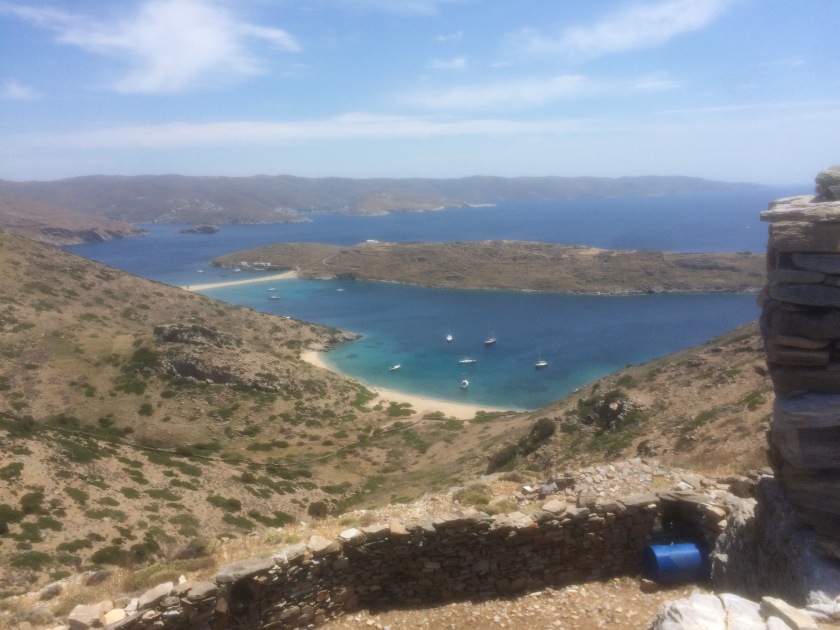 We walked to the top of the hill and looked down on our boat, 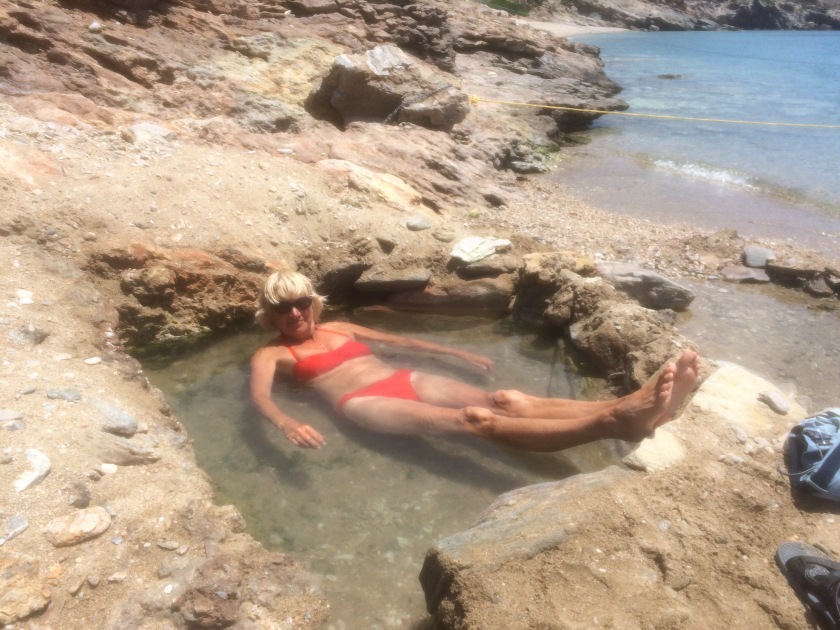 me in a hot spring bath.

We had a horrid sail to Kithnos. Short sea, so bumpy, high winds, 30 knots and no sun. We were crashing down the troughs and riding up and crashing down,  spray everywhere, water rolling down the boat into the cockpit, bloody awful. Heeled right over, Simon fighting the helm, it was the gulf of Corinth again only not so cold. We put the engine on to hasten our progress and then prop was coming out of the water we were heeled over so much. And on top of that the engine kept stuttering.

I was very pleased to get to our destination on Kithnos,, a nice sheltered bay, out of the worse of vthev winds. Then the  engine conked out. I was at the anchor( which also wouldn’t work) when Simon said ‘ I have a problem ‘. I could hear that the engine had stopped, so I instantly put out all the fenders( there were other boats at anchor). Simon came and sorted the anchor by pulling the chain out manually, he just dumped it all in the sea so we had some downward drag on the boat. The he set about looking at the engine- and he fixed it- he’s amazing!! So then we set the anchor properly and all was ok again.  I’m certainly being pushed outside my comfort zone!!  We discovered that a mooring line, which had been secured at the front on the pulpit, with all the shaking and crashing about, had become detached and had fouled the propeller- again.

The next morning we moved the boat to where I wanted to be. Fikiadha bay. There’s a sandbar, boats anchored on both sides. We chose our side for shelter, anchored and then discovered the boat next to us was Blue Jay with Jane and Peter!! They helped us set our boat with 2 shore lines, so we won’t swing and should have a good night.

There was a hot spring on the beach near us. I like a hot bath and have been missing them. So in I went – see pic! It was lovely and sunny today, if a little windy.

We also had a lovely beach barbecue with Jane and Peter,  starting with a dip in the hot spring with wine and then sitting on the beach till almost 11pm. That’s the best about this adventure- the lovely people you meet.

One thought on “Serifos – Kithnos”