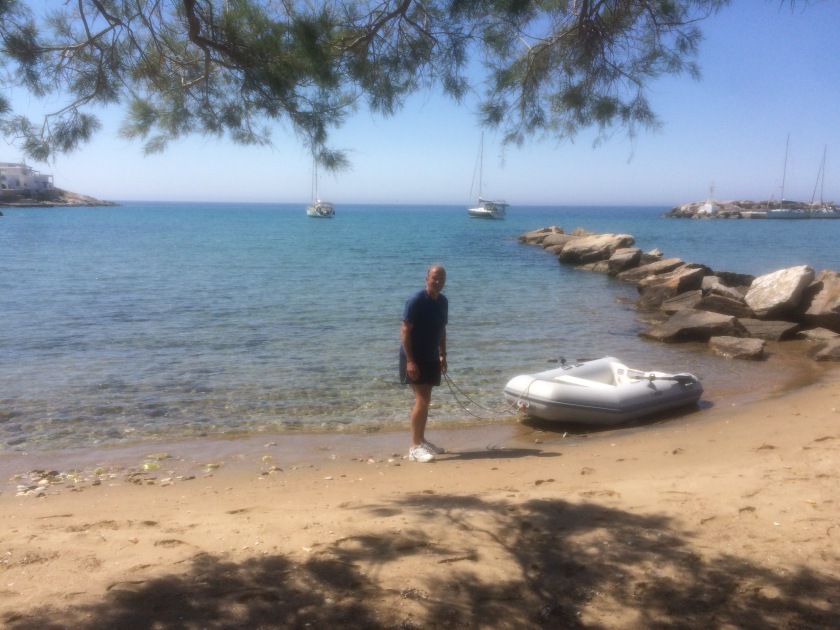 We had a good sail into Sikinos. By good, I mean we sailed. I don’t like it when we motor as you sometimes have to. If there’s any wind, the Admiral ( me) says ‘ get the sails up, why are we motoring?’

We sailed to Sikinos, a very small island, remote, that I fell in love with. It was beautiful. We anchored in the bay, one of 2 boats there. The town quay was very small too, with 2 boats moored side on, but room for 2 more. There were a few houses and apartments, a small Taverna, not geared up for meals, a small mini market and a sandy beach. With a line of trees behind. There were some ruins amongst the houses, a feature here. And no- one.

We stayed 2 nights. It was blistering hot. For the 1st time we had breakfast in our swimsuits! We also had the wonderful experience of swimming in to the beach( using our new flippers ( thank you Suzie) and snorkels( thank you Ben and Sam!). We had a beer at the Taverna and swam back. They sea was so clear and clean. It was heaven.

Later, we took the bus to the ‘Chora’ or village. Again, whitewashed buildings and alleyways,amid ruins,  but deserted. It was up in the hills , not on the coast and a pathway led us up and up to a monastery perched on the hilltop. We entered and were met by a nun, who was very welcoming. She said they rarely get boat people up there. She gave us water and a Turkish delight and told us the history and about herself. She opened the chapel for us and imvited us to look around. She’s there on her own, aged about 40.  It’s really remote. She makes soap and other products including alcoholic ones, so we bought a few. I really admired her dedication and she  emitted  grace, although I doubt Simon would agree. The views from there were amazing. You can see about 10 other islands. I hope the photos do it justice. On our descent we found a Taverna- not easy but Simon was determined!! We met an English couple called Hilary and Mike (or Dave) who live there, the only English people to do so. They were very interesting to talk to. They’ve lived there for 17 years for 9 months of the year.

I could’ve spent a lot more time there. My favorite so far, but we have to move on. Folegandros next. Regretfully, we leave. 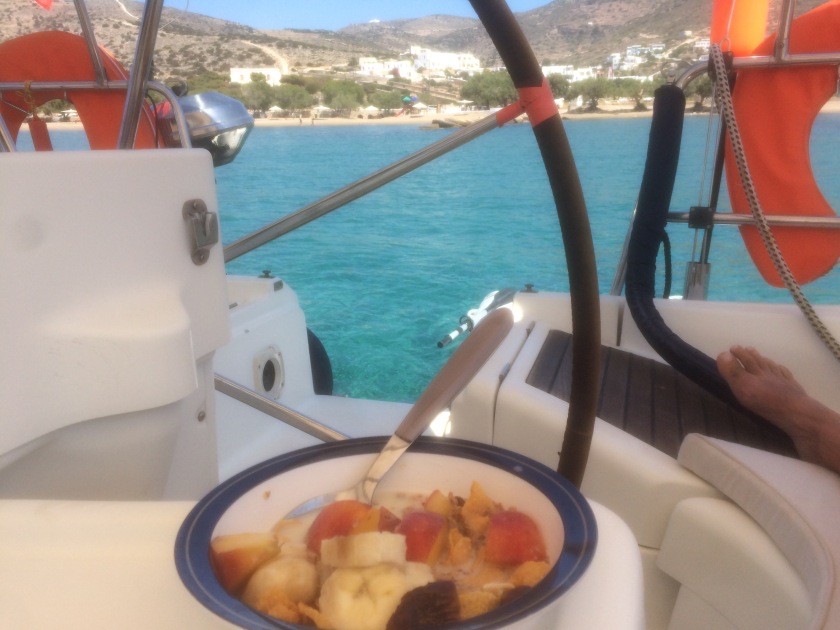