Well that’s sailing for you…

We stayed in Aigina for 2 nights due to the weather forecast. It rained for most of the day and we sat in our cabin and read our books a lot. We even put the heating on. On a boat!! But happily it works.

It’s a small but interesting harbor. Due to the weather it was full, but boats kept coming in and trying to squeeze into impossibly small places, or double park. It was quiet chaos. I felt really sorry for the poor crews. This is low season too!!

We set off really early (7.30)(yes, Julie was up!) with the plan to arrive at Kea ( IKEA without the I!) earlyish to avoid congestion.  The sun 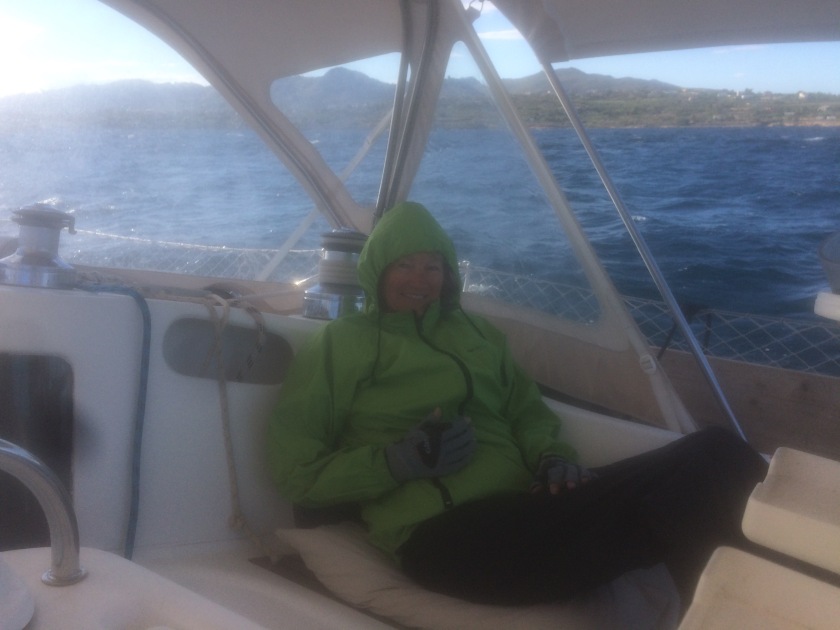 eventually showed itself but it took its time. This is me first thing feeling cold!!

We started on a broad reach ( explanation later!), sails on the starboard side ( which is on the right- I remember that you pass the Port to the left, Port = left) then beam reach, hard on a Port tack. Hard = trying to sail close to the wind.

We made a good speed, bit too windy for me, must’ve been Force 5 gusting 6 with a short sea. It was nice because Simon used the auto helm and we could sit and chat (it’s our 38th wedding anniversary today). He fixed the poorly performing auto helm by removing his big electric drill from on top of it!! The magnet was messing it up!! It’s in the starboard rear cabin.  Anyway, it was more convivial using the auto helm. We whooshed through the waves, heeled over, the bow sending a spray spilling up under the genoa. It was good.

Suddenly (De Repente!!), Simon asks me to grind (winch) the Head sail (Genoa) and quickly. I tried but couldn’t shift it. Then he said ‘oh- it’s coming down’ and it did. It fell off from the top. Our new £ 50 halyard snapped (a rigging problem). Simon had to go on deck in not too terrible conditions and rescue it. Then he found another halyard to use and sat at the front covered in sail, re threading it, while my job was – yes, you’ve guessed- to winch. It was really hard. I couldn’t see him and I worried   that he’d been knocked into the sea, so I kept checking, then winching, my poor arm muscles. I collapsed when it was finished.  The sail was up again tho.  Wow!! ( I think I’ll have a service action like Serena Williams when I get home -beware!)

The winds got stronger and the sea got bigger as we approached Kea as the fetch got longer. We took the sails down, which has the effect of destabilizing the boat. It was rising up the waves and crashing down, spray everywhere, including some in the cockpit, it was rolling too. Not good for sea sickness, which I felt a little. I wasn’t keen on this bit and was glad to get into port.

We’re on a town quay, very quiet, near a Taverna, very pretty place. We executed a perfect stern to, mooring. God we’re getting good at that!

Beam reach- wind is about 90deg to the boat

Run – when the wind is behind the 45deg mark

Dead run – a bit dangerous- the wind directly behind boat

Reach -When the wind is coming from a direction in front of the beam (90deg mark) up to about 45deg from the front.

Tack- from the 45deg mark up to wind dead on i.e. Straight in front of you.

It would be easier to draw a diagram!!

More pics when we get them off the camera,  I think I took a nice one of the spray coming off the sail.